Monopoly board in a day challenge .

So I finally found time to do the monopoly board in a day. It was a great adventure and  lots of fun. So on Sunday the 22nd of June me and my friend and fellow adventurer Helen set off . We left Euston at 10.25 am We d bought  a disposable camera so as to record our progress round London. Very old school I know.  We had a route map courtesy of a pack of girl guides who'd  done it and some background on the squares courtesy of some air scouts.

The Guides had set off from Paddington presumably that being the London terminus for where they were based. We on the other hand wanted to end up back at Euston. Given that the nice people from Waddingtons had included Euston Road we thought that was eminently achievable.  They were based in Leeds which might explain the random nature of sin of their choices of property.Allegealy they'd  Sat down in a pub in Angel and picked the properties over a pint or two.

Having reordered our route slightly we set off for Oxford Circus on the Victoria line.

Emerging into daylight we soon ticked off Oxford Street and Regent Street. Regent Street was closed to traffic and filled with old buses celebrating the year of the bus. After a quick consultation for directions we set off into the more prosperous part of London in search of the two Dark Blue properties. The streets of Mayfair were strangely quiet on a Sunday morning. The high end shops shuttered. We spotted several embassies and having traversed Mayfair successfully sadly with out spotting any Nightingales singing in Berkley Square. We reached Park Lane and pausing to admire the various psychedelically painted animals outside the Dorchester  Hotel including a Winnie the Pooh on Acid  we set off to track down Bond Street. En Route we passed through Grosvenor Square and in front of the American Embassy where we were probably bugged and tracked by snipers . We paused briefly to admire a statue of Eisenhower and a bijou Tardis complete with phone which appeared to be wired in still probably to the police but a very thick layer of grime suggested no one had used it to summon a police since around the time of Dixon of Dock Green.

We snapped a photo outside Bond Street tube thus completing the more expensive side of the board with 2 Dark blue and a Trio of green under our belt. Cutting slightly off the beaten track we discovered a charming snicket lined both sides with bistro tables with a very European feel.

We emerged from Maddox Street back onto Regents Street , and opposite our next target Greater Marlborough Street. The name perhaps shortened to fit into the square. All the Orange ones have a Law and Order connection and Marlborough street was apparently the site of a court.

We strolled down Regent Street and past Hamleys where we spotted a bus stop made entirely of lego. Admiring various buses on the way. We were looking for Swallow Street as theis would lead us to Vine Street. A rather unpreposessing  cul de sac of dubious merit and short length. Whose inclusion on the Monopoly board must be due to pagan sacrifices or masonic influence nothing else makes sense.

We exited swiftly onto Picadilly and picture snapped sauntered up to Eros and a stop at Boots for some Lunch. It was 12.20 and Boots wasnt open for another ten minutes so we made a quick detour to Macdonalds in order to use their facilities and get a McFlurry each.

We then wandered in the sunshine up Coventry Street that connects  Picadilly Circus to Leicester Square a Road that many have probably travelled without realising that it was from the monopoly board.

We  strolled down to Trafalgar Square and having established ourselves on a patch of greenery in front of the National Gallery we had  lunch while listening to the strains of Michael Jackson  songs from Thriller Live as West End Live continued.

After a well deserved rest we strolled down the far side of Trafalgar Square and quickly eliminated Pall Mall where we admired a vicious looking statue of a Kangaroo made from scrap , Whitehall, Northumberland Avenue and The Strand in short sucession

At this stage we had now added all the yellow and purple properties to our tally and one each left of the orange and yellow.

Hopping on a bus as instructed by our paperwork we shot up the Strand alighting at the Strand Palace Hotel. We then wandered up to the rear of Covent Garden area to tick off Bow Street. Stopping briefly to admire an old fashioned sweet shop on the way.  Continuing  the sweets and confectionery theme we walked along the side of  Theatre Royal which is currently showing Charlie and the Chocolate factory. Where a Oompa Loompa popped out and serenaded us.

for you
Oompa loompa doompety dee
If you are wise you'll listen to me
What do you get when you wander the streets
Trying to achieve a Monopoly  feat
What are you at, getting terribly sore

We peeked in the door of Sarastro admiring the opulent and somewhat over the top operatic interior before cutting down the side of Drury lane. Sadly there was no sign of the Muffin Man 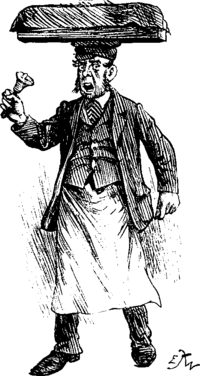 Our next stop was Fleet Street which we decided to walk to rathe rthan get the bus as advised by our guide supplied paperwork .

We passed St Clement Danes church, adopted by the RAF as their church  and bombed severely a spart of the Blitz just as the campanolgist started practicing just before two . Either that or the clock had just struck 13 . The church is opposite the Royal Courts of Justice .

"It was a bright cold day in April, and the clocks were striking thirteen" is the opening line to George Orwell's 1984

The novel Nineteen Eighty-Four has the protagonist encountering a picture of the church and is subsequently told how it once stood in the area in front of the Palace of Justice before being demolished in the revolution.

We wandered  out of the Strand and into Fleet Street home of Sweeney Todd and by doing so completed the properties on 3 sides of the board. All we now had to do was the brown and light blue , the utilities and the stations.

We were lucky enough to spot a heritage routemaster and hopped on enroute for st Paul's  where we disembarked and walked over the bridge the Tate modern being our "former" electricity works and we ambled towards London Bridge ticking off the site of a former water works represented by some "disco lights" under a bridge was the nearest to its site. Enter route we passed the Clink museum the former jail and generator of the slang name for prison as our Jail.

We hopped a bus to the old Kent road where we refuelled on lovely cakes at a algerian patisserie / cafe . We then hopped on another bus over tower bridge and  hopped off near tower of London so we could tick off Whitechapel and Fenchurch street.

We were now on the home straight   we hopped on the tube and ticked off Liverpool street and got off at Baker street and treked over to Marylebone.

This left us the light blue and one station  which fortunately are very close to Euston where we started  and our final destination.

So it was bus to Angel and a picture of a suitably named pub. Then round the corner to Pentonville road and back on a bus and down the hill to Kings Cross station and Euston Road. Feeling satisfied we rounded off our set with a picture of an interesting looking branch of Barclays and a bike rack on the way back to Euston . The nearest you'll get to free parking in central London.

The time was around 5.30  so satisfied with a successful and interesting day we treated ourselves with a visit to the" Cider tap."This square building is one of a pair on Euston station forecourt serving craft alcohol. The sister "Euston tap" serving beer and the "Cider tap" cider and Perry .

Having had a well deserved pint  we ambled slowly but contentedly into Euston station and thus home...